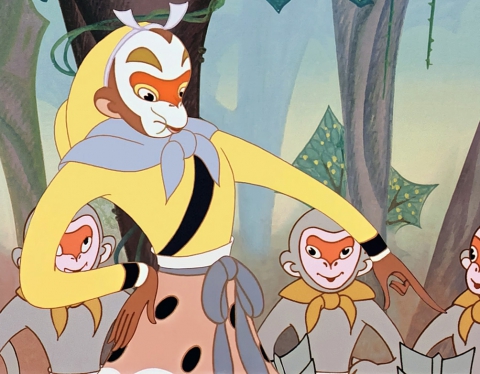 Based on a classic Chinese legend, the film follows the adventures of The Monkey King, born with great strength but without a weapon. Following an old monkey’s suggestion, the Monkey King invades the dragon’s palace and steals the golden staff, leading to the Dragon King accusing him of theft, causing havoc in the celestial kingdom. A recently restored version of the 1961 Chinese animation classic featuring a new soundtrack. 
Born in Nanjing, China. He was one of the Wan Brothers, the pioneers of the Chinese animation industry, and became China`s first animator. As the director of the Shanghai Animation Film Studio, he would raise the standard of Chinese animation to an international level. He directed The Princess Iron Fan (1941), the first Chinese animated film, and The Monkey King: Uproar in Heaven (1961), now restored in a new version with modern animation technology.


Born in Anhui, China, in 1919. Growing up in Shanghai, she was trained as a painter by her father. She later joined the animation department at Shanghai Film Company. Her film The Turnip Has Come Back (1959) was awarded at the Karlovy Vary Film Festival, in Czech Republic.