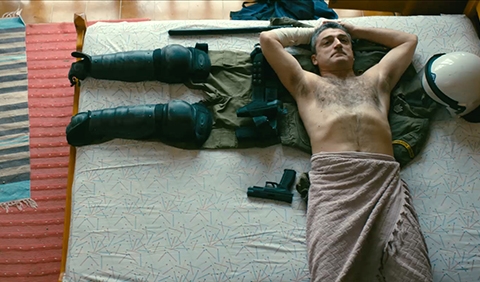 A gipsy dancer is discovered by a violin player in an orchestra and is admitted to a ballet-dance academy. This is only a fragment of the film that was lost in the archives of the film producers. The end of the film shows a performance by the ballerina.


Born in Helsinki, in 1883 – the son of a musician from the Russian armada, of Jewish origin. From an early age, Mauritz Stiller learned how to sing, to play the violin, speak foreign languages, and to recite Shakespeare and Molière by heart. To get out of the military service in Finland, as yet under domination of the Czar, he ran away to Sweden, a country he adopted as his own. Passionately fond of theater, he began to work as an actor and was part of various groups before meeting future film maker Victor Sjöström, a master in Swedish film. Sjöström and Stiller acted together in numerous short films, some of them lost following the outbreak of fire at the Svenka Bio film producers. Some of his first films were The Black Masks, The Vampire, The Tyrannical Fiancée, The Child, all of these from 1912. His first important film was Love and Journalism (1916), a comedy on a young reporter who finds employment in the house of a polar explorer to get himself a scoop. These were followed by Thomas Graal’s Best Film (1917) and other comedies. In 1920, he made Seduction, a sensual adaptation of a play by Hungarian Ferenc Herczeg, whose extravagance and dandy features rendered him comparable to Ernest Lubistch. Victor Sjöström consolidated his reputation with dramatic adaptations based on Scandinavian literature, and Stiller, likewise, followed along the same path with detailed plots and complex personalities, and made Song of the Scarlet Flower (1919), adapted from the novel by Finnish author Johannes Linnankoski. From Selma Lagerlöf, one of Sjöström`s favorite authors, Stiller extracted The Treasure of Arne (1919), whose sumptuous scenes influenced Sergei Eisenstein in Ivan the Terrible (1942-1946). From the same author, he adapted Gunnar Hede’s Saga (1923) and The Atonement of Gösta Berling (1924), with a revelation, namely, actress Greta Gustafson at the age of 19, later known as Greta Garbo. With the success of the film and of the young actress, Stiller and Garbo were contracted to make The Odalisque from Smolny in Germany