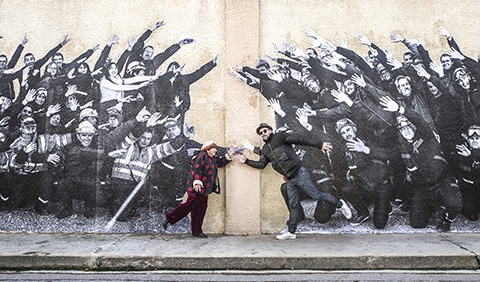 Agnès Varda and JR have things in common: their passion for images and more particularly questionning the places where they are showed, how they are shared, exposed. Agnès chose cinema. JR chose to create open-air photographic galleries. When Agnès and JR met in 2015, they immediately wanted to work together, shoot a film in France, far from the cities. Random encounters or prepared projects, they will go towards the others and get them to follow them on their trip with JR’s photographic truck.

Winner of the Golden Eye of best documentary at the Cannes Film Festival. 
Born in France in 1983. He is a visual artist, photographer and director. JR is known for exhibit huge collages on walls, staircases and streets of various countries around the world. Made his directorial debut with de documental feature film Women Are Heroes (2010). He is also the director of the short movies Ellis, les Bosquets and Walking New York, both of 2015.