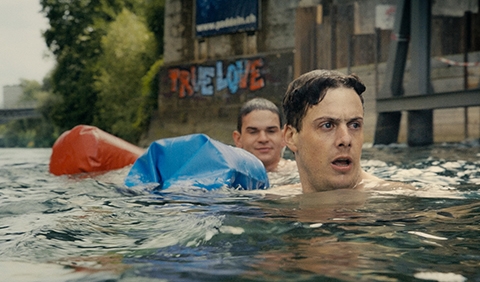 August 1, in Zurich. Vinc and his accomplices plan an attack on a commercial street, to make a statement against capitalism in Switzerland. Meanwhile the hunter Edi gets disturbed, because a financial emergency puts his morals into question. Sonam starts her first day at work as a policewoman. There she gets to know the shady side of the job. Full of hope, Sonja, a young Ukrainian woman, arrives in Zurich to surprise the love of her life. Javier doesn’t feel at home in Switzerland anymore and decides to return to Chile. He takes his daughter with him, but without her mother knowing. 
Born in Trüllikon, Switzerland, in 1983. He trained graphic design and studied film at Zurich University of the Arts (ZHdK). He directed, among others, the short films Magnetfelder (2011), Island (2012) and King (2015). Periphery is his first feature film. 
Born in Zurich, Switzerland, in 1989. She studied film at the Zurich University of the Arts (ZHdK). She directed short films like Vögel Explodieren Nicht (2012), Auf Ewig Dein (2014) and Tüüfel (2015). In addition to directing, she works as an editor and editorial assistant. Periphery is her first feature.