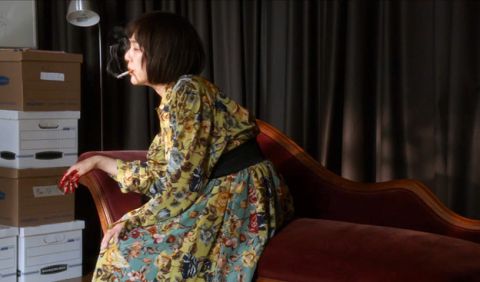 Years after she related to him the story of her parents’ death in a fire, for which she feels responsible, Azusa meets her Japanese psychiatrist Dr. Sanada once again. Back then, she lambasted him for being wrong for the job. Back then, he let slip that she isn’t actually crazy. Now she’s a prostitute living in precarious circumstances in Los Angeles and is accused of murder. Sanada assesses her in the presence of an investigator who appears not to understand Japanese. 
Born in Tokyo, Japan, in 1952. She is an actress, singer, professor, writer and director. She studied at the Royal Ballet School in London and at the Bungakuza School of Dramatic Arts. She has acted in more than 60 films, including Akira Kurosawa`s Kagemusha (1980), Shoei Imamura’s Eejanaika (1981, 6th Mostra) and Aleksandr Sokurov`s The Sun (2005, 30th Mostra). Her writing and directing debut was with Faces of a Fig Tree (2007).