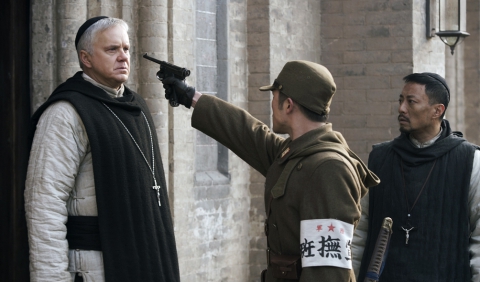 "In 1942, Henan province was devastated by the most tragic famine in modern Chinese history, resulting in the deaths of at least three million men, women and children. A humanitarian crisis first sparked by drought and then compounded by a combination of windstorms, government corruption and the war with Japan – which made the province`s full supply of grain is to be diverted to the Chinese troops. Amidst a scenery marked by desolation, Fan, a wealthy landowner who loses everything, joins the caravan of refugees surging out of Henan in search of grain; while American journalist Theodore, a witness of the carnage, tries to aware the Chinese authorities about what is happening in the province." 
A former popular Chinese actor, Feng had its directorial debut with the drama Sigh (2000). In the following years, he directed, among others, Big Shot’s Funeral (2001), Legend of the Black Scorpion (2006) and After Shock (2010). Back to 1942 premiered at the Rome Film Festival.