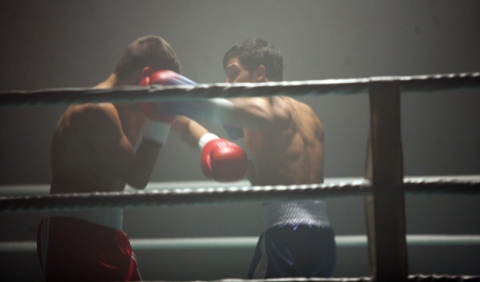 Rafael and Cristina are two people that were never supposed to meet. He is 19, Gypsy, works in a car-wash and wants to make it big as a boxer. She is 34, Hungarian, an actress in the local theater, married and going through a professional and personal crisis. Without knowing each other, Rafael follows Cristina every day on the streets. She knows it and enjoys the attention. One day, he asks: if you hadn’t been married, would you have married me?” From that moment on, there is no way back.


Born in Romania, in 1975. Graduated in directing from Columbia University, where he also taught. In 2002, he graduated from the Romanian National University of Theater and Film. During his studies, he wrote and directed a number of short films and documentaries. He made his debut in features with If I Want to Whistle, I Whistle (2010, 34th Mostra), winner of the Silver Bear and the Alfred Bauer awards at the Berlin International Film Festival. Box is his second feature.