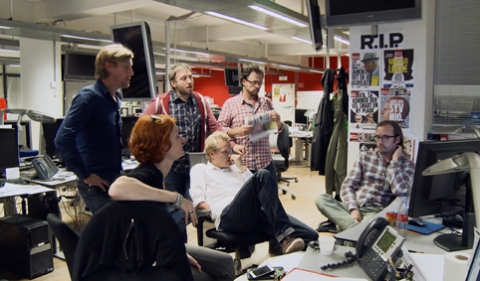 The world of printed media is threatened by the financial crisis as circulation figures are falling and the media corporations` economies are faltering. The Danish media is marked by the crisis as well —and also Ekstra Bladet is going through the worst crisis in the newspaper`s hundred years of publishing. The readers have gone online and are bankrupting the printed newspaper. And no one has yet cracked the code on how to capitalize on news on the web. Every day Denmark`s old watchdog, Ekstra Bladet, competes with other newspapers for the readers and the good stories, and the battle is fierce. The film is a portrait of a tabloid newspaper entering a new era.


Born in Denmark in 1973, she graduated in documentary direction from the country’s National Film School. Worked for several years in radio before making her directorial debut in 1992 with Epilogue, co-directed with Sara Bro. She is the co-owner of Danish Documentary Production and her films include Fish Out of Water (2000), Detour to Freedom (with Sidse Stausholm, 2001), My Father`s Choice (2002) and A Normal Life (2012).