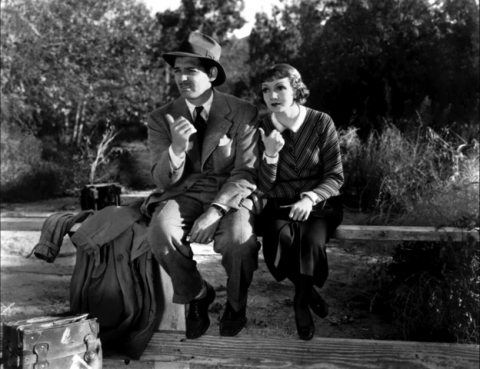 IT HAPPENED ONE NIGHT
United States

Ellie Andrews is the young daughter of a millionaire who doesn’t accept her marriage. She decides to run away to New York so that she can be reunited with her fiancé. On a night bus she encounters Peter Wayne, a recently fired reporter who offers her a deal: if Ellie gives him the exclusive story, he won’t tell anyone where she is and will help her get to her destiny. Ellie accepts the offer and the two embark on a road trip full of adventures, during which their initial distaste for each other makes room for other feelings.

Preserved by the Museum of Modern Art with funding provided by The Film Foundation.


Born in Italy in 1987, Capra immigrated to the United States as a child. He started his career during the silent era and became one of the most prominent filmmakers of the 1930s, a decade in which he won his three Academy awards for best director. In 1931, he began a long collaboration with writer Robert Riskin, working together in films like American Madness (1932), Lady For a Day (1933) and It Happened One Night (1934). He also stablished an important partnership with actor James Stewart, who starred in You Can’t Take It With You (1938), Mr. Smith Goes to Washington (1939) and It’s a Wonderful Life (1946). Capra died in La Quinta, California, in 1991, at the age of 94.