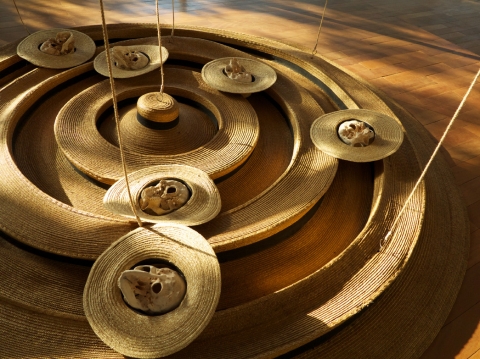 Ordered by the Inhotim Contemporary Art Center, these videos directed by Murilo Salles between 2012 and 2013 register performances and installations by Tunga, one of Brazil’s most important contemporary artists.

Tunga was born in 1952 and lives in Rio de Janeiro, where his studio is located. He began his career in the early 70s and has investigated literature, philosophy, psychoanalysis and dramatic arts, aside from mathematical and biological science, ever since. The world’s most prestigious galleries exhibit his work. In Inhotim, he permanently exposes Tunga`s Psychoactive Gallery.


XIFÓPAGAS CAPILARES - 8 min.
A piece performed for the first time in 1985, during the 2nd Congress of the Rio de Janeiro Freudian College: Psychoanalysis in Brazil.

TEREZA - 7 min.
A piece performed for the first time in 1998, at the National Museum of Fine Arts in Rio de Janeiro.

MAKE UP COINCIDENCE - 6 min.
Make-up Coincidence was performed for the first time in 2002, at the Luhring Augustine Gallery in New York. 
Born in 1950 in Rio de Janeiro. He works as a cinematographer, filmmaker, screenwriter and producer. In 1984, Happier Than Ever, his first feature film, won prizes at Brazilia, Gramado and Locarno. He later directed Two Edged Knife (1989); Two Billion Hearts (1995), a documentary about 1994 FIFA World Cup; How an Angel Was Born (1996) and Seja o Que Deus Quiser (2002). His last film Camila Jam (2007, 31st Mostra) won the best picture prize at Gramado. At the 38th Mostra, he is also member of the International Jury and presents his documentary Aprendi a Jogar com Você (2014) and his four short films on Tunga’s performances made for Instituto Inhotim.