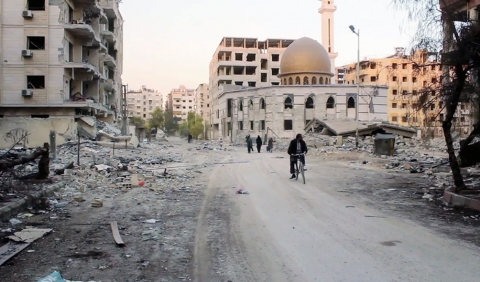 The perilous journey of Yassin Haj Saleh, a well-known Syrian intellectual and dissident, and young photographer Ziad Homsi who travel together in an arduous, dangerous route from the liberated area of Douma/Damascus to Raqqa in northern Syria, only to find themselves eventually forced to leave their home country for a temporary exile in Turkey.


Born in 1967 in Damascus, Syria. He obtained a DEA in history from the Sorbonne. Since 2000, he has been writing for Arab and international newspapers on political and cultural topics. He directed the documentaries Ibn Al Am (2001), Waiting for Abu Zaid (2010) and Ibn Al Am Online (2012). 
Born in 1989 in Damascus. With the beginning of the Syrian Revolution in March 2011, he has become one of the most important photographers in his hometown, which is the suburb of Douma and is known to be one of the centers of the uprising. He directed the short documentary Oh Douma (2012).