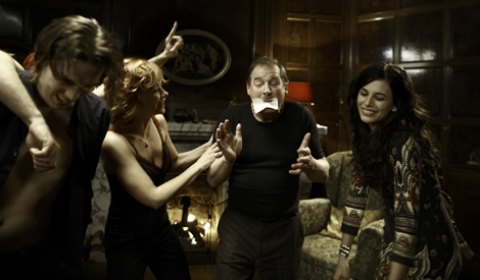 Joseph is a man in his mid-fifties who has just lost his beloved wife. He remains lonely and isolated in his old Villa, where everything painfully reminds him of the past. One day some visitors turn up unexpectedly, who appear to be relatives of his deceased wife. At the beginning, the uninvited guests support Joseph with loving care, but the situation slowly starts to change. The friendly visitors are becoming hostile, aggressive invaders. They try to get rid of Joseph and occupy his house, his world, and his thoughts.


Born in 1957 in Georgia. He studied directing at the Institute for Theatre and Film in Tbilisi. He directed the short films White Nights (1984) and Guests (1990). In 1993, he won the Silver Leopard at the Locarno Film Festival with his feature On the Borderline (1993). Among others, he has also directed the features Lost Killers (2000) and Mediator (2009).