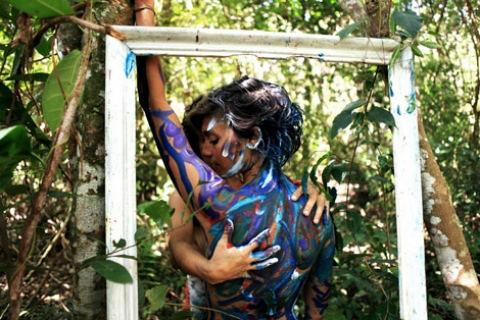 The documentary portrays a magical and breathtaking place in a valley in Brazil, hidden one thousand meters above the ground, attracting people from all over the world who leave large cities to reinvent themselves and everything they believed in. They turned the place into a center for experimentation, diversity, and ideological conflicts which amaze and threaten the life of the whole community at the same time. 
He studied film at the Univercity of California Los Angeles, majoring in scriptwriting and direction. After graduating, he started working in the production departments of Sony Pictures and Miramax Films. Back in Brazil in 2005, he has worked as a direction assistant in documentaries, TV shows, and commercials in São Paulo. He was the producer of the Brazilian episode of the National Geographic series Don’t Tell My Mother and of the project Global Culture, filmed in over 30 countries. He has directed the medium-lengh documentary Desatando Nós (2011). Beyond the World is his first feature.