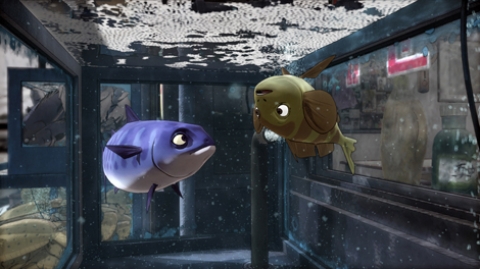 Once a free fish in the ocean, the mackerel was caught by the fishing net and brought to the fish tank in a seafood restaurant. She relentlessly searches for a way out since she came into the tank. The skeptic pessimist “old-flatfish” was also from the ocean, unlike other fishes in the tank raised in the fish farm. As the longest survivor in the tank, he reigns over other fishes with his knowledge of survival. To him, mackerel`s protest to escape from the tank is a threat to his regime. 
Born in 1977, he made the short animation films The Paper Boy (2001) and We are the Punx (2003) while he studied animation at the Sejong University, in Seoul. After he graduated, he worked in various TV animation projects. He currently runs his own animation studio. Padak is his first feature film.