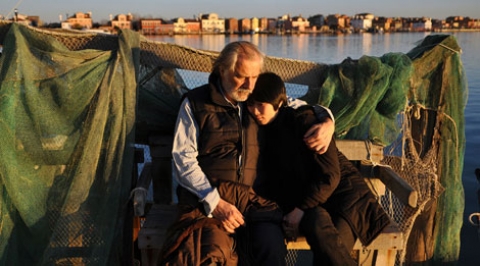 Shun Li and the Poet

Shun Li and the Poet

Shun Li works in a textile factory in the outskirts of Rome in order to get her papers and enable her eight-year-old son to come to Italy. She is suddenly transferred to Chioggia, a small city-island in the Veneto lagoon, to work as a bartender. There she meets Bepi, a Slavic fisherman, nicknamed “the poet” by his friends, has been a regular at that little pub for years. The friendship between Shun Li and Bepi upsets both the Chinese and local communities. 
Andrea Segre As a director, he has studied and reported on migration to Europe and contradictions of the developed world now for several years. He wrote and directed Marghera Canal do Norte (2003), Che Cosa Manca (2006), La Mal’ombra (2007), and A Sud di Lampedusa (2007) on expelling immigrants from the Tenere Desert of which Like A Man On The Earth, to a certain extent, is a continuation. Dagmawi Yimer He graduated from a British school in Adis Ababa, attended some years of Law School, but for political reasons decided to emigrate. He reached Lampedusa by way of Lybia in July 2006, where he was granted humanitarian protection. Since 2007, he has collaborated with the Ainitas Italian school, as a volunteer and video-maker. He made one of the episodes of Il Deserto e il Maré and some short films as a class assignment. The Salina Doc Fest, a festival of narrative documentary in one of the seven islands of the Sicilian archipelago of Eolias, has now entered into partnership with Mostra Internacional de Cinema - The International Film Festival, in São Paulo, for a unique cinematographic interchange. Mostra will indicate films for Salina - in this case, the best Italian film of the second edition of the SalinaDocFest 2008, 22 through 28 September, awarded the Premio Brasile, and the film will, in addition, be shown within the program for the 32nd Mostra. The film chosen by a Brazilian jury (Renata de Almeida, Beth Formaggini, and Leon Cakoff) was Like a Man on the Earth, by Andrea Segre and Dagmawi Yimer. The prize from Mostra was justified because the film “focused on a social theme concerning immigration, solidarity, exile, political persecution, and resistance. And, especially, because this is a film that affects Italy in two ways - by the controversy of its policy against immigrants, forgetting that Italian culture was spread by immigration all over the world; and because the film deals with the direct consequences of the countries’ not too distant colonial policy in Africa, in this case, in Ethiopia.” Salina and São Paulo are starting on a cinematographic partnership that is a great stimulus to us. The history of São Paulo and its cultural background has passed through the voluntarism of Italian immigrants and the enchantment afforded by Italian cinema itself over the course of golden decades. Salina is the setting and inspiration to many chapters of this our story in common as film lovers. Films such as Stromboli (Roberto Rossellini), L’Aventura (Michelangelo Antonioni), and The Postman (Michael Radford) were all of them filmed there, among many others. Salina is a new stage, also, for Brazilian cinema that has so enchanted the world since it came of age with visions that are more pluralistic and diversified of Brazil’s giant cultural universe. With this partnership, São Paulo and Salina will exchange various experiences with the firm objective of benefiting mutual cinematographic knowledge. We hope that our example as a twosome, will be in use at many other film festivals. (Leon Cakoff)