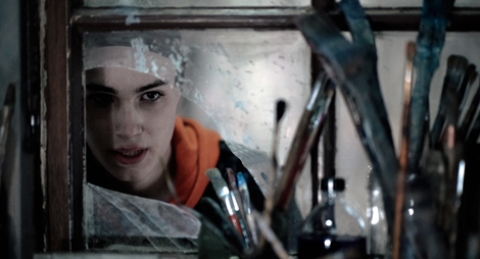 Greg decides to kidnap English teacher Camille with the help of his best friend, Louis, seemingly without any real motivation other than the adolescent desire to commit a crime. After trying and gagging their victim, they keep her hostage in a remote log cabin by the misty swamplands. When Greg gets into a car accident in a nearby road, Louis is left to deal with Camille on his own. Based on a novel by the writing duo Boileau-Narcejac, authors of the novels that originated the films Les Diaboliques and Vertigo. 
Yann Le Gal - Directed the short film Le Griselet (1992), and has been screenwriter for such films as Marie-Antoinette, by Alain Brunart, Josephine, by Jean-Marc Vanvoort, A La Recherche de Largo Winch, by Yves Legrain-Crist, and Les Larmes du Petit Prince by Erwan Legal. Isild Le Besco - Directed the awarded Demi-Tarif (2003) and her first feature film is Charly (2007). She is also an actress in films such as À Tout de Suite (2004), Camping Sauvage (2005) and Backstage (2005). Joana Hadjithomas e Khalil Joreige - Two young Lebanese producers who have being working together for many years, in Paris and in Beirut. Graduated in Cinema, they wrote e directed a several short-films, among them The Agony of the Feet, 333 Sycamore and Faute d`Identités. Around the Pink House is their first feature-length film (23th Mostra). They directed also the fiction film A Perfect Day (2005). Ismaël Ferroukhi - Born in Kenitra, Morocco. After directing his first short film, the awarded L`Exposé, in 1993, he co-wrote the script for Trop de Bonheur (19th Mostra), by Cédric Kahn, in 1994. He worked again with Kahn in Zero Guilt (1996) and L’Avion (2005). Le Grand Voyage is his first feature and has been shown at the 29th Mostra. Corinne Garfin - She directed the awarded short films Les Vagabonds (1996), Anissa (1998), La Collection de Judicael (2003), and Seul (2005), and also the documentaries L’Ordre Vert and Bakary et les Autres. Safy Nebbou - He directed the awarded short films Bertzea (2002) and Lepokoa (2003), and his first feature film is The Girafe’s Neck (2004).