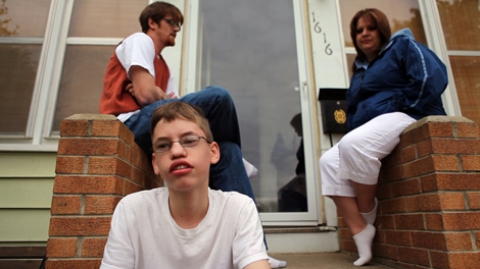 Millions of children around the world are affected by bullying, from being called names to getting physically abused. The documentary follows a number of kids and their families living in small American towns over a school year and coping with this problem. A shy boy is beaten by his classmates while riding a school bus every morning, not realizing how serious the situation is. A teenager in Oklahoma faces discrimination by her classmates, teachers, and the entire town once she comes out of the closet. A single mother`s daughter faces years in prison after pulling out a gun inside a school bus in order to defend herself. Two families struggle after their sons, unable to take the abuse they got in school, end up committing suicide. The film utilizes home videos and original footage to expose the emotional and physical scars left by bullying and also to show the inefficiency of the school system in dealing with the problem. 
Born in Long Island, New York, in 1972. Hirsch studied at Hampshire College and the New York Film Academy. He directed the short documentary film The Last and Only Survivor of Flora (1993). He al sodirected the feature-length documentary Amandla! A Revolution in Four Part Harmony (2002), winner of the Audience Award at the Sundance Film Festival. He directed episodes for the Discovery Channel’s series NextWorld. Bully is his second feature.