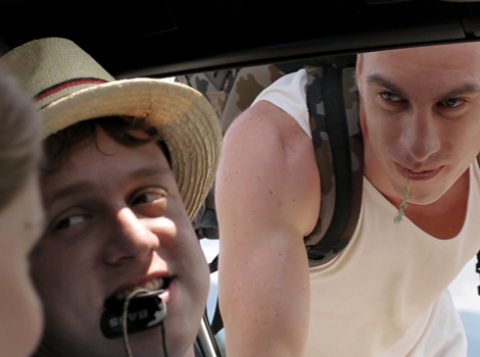 Ziva, Andrej and Gregor are best friends since high school. Gregor is a soldier who is about to embark on a mission to Afghanistan, Ziva is going to study abroad, and Andrej hates everything - himself included. They decide to go on a road trip to the seaside just like they did when they were in high school. On their arrival, they get drunk. Ziva and Gregor kiss each other, and their relationship is shattered. Andrej, who doesn’t know anything, keeps making fun of everything, mostly of Gregor and his army ideals. Until Ziva, in a fit of rage, destroys their tent and reveals a secret that enrages Andrej.


He was born in Novo Mesto, Slovenia, in 1985. When he was in high school, he wrote a short fiction stories collection called Nothing Escapes the Squirrels, which earned him awards in his home country. He studied film and TV direction at the Academy of Theater, Radio, Film and Television in Ljubljana, Slovenia. While studying, he directed Burgundy Red (2007) and Caretaker (2008). A Trip is his first feature film.