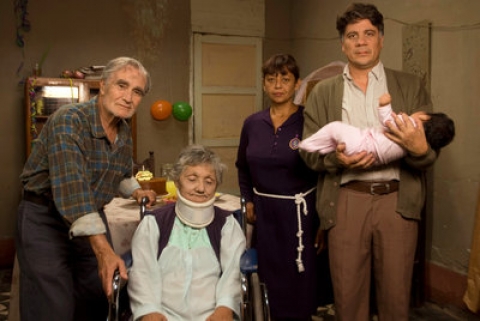 Clemente, an extremely quiet pawnbroker, is Sofia’s hope to avoid solitude. Being his neighbor and a single woman, she spends her days as an October worshipper of the Lord of the Miracles. One day, Clemente is left with a newborn baby. While he looks for the baby’s mother, a prostitute, Sofia joyfully starts taking care of this baby in Clemente’s house. Clemente will thus discover emotional attachments he never had.


Journalist, filmmaker, cartoonist, illustrator and graphic designer, he is one of the editors of Tarja Preta magazine. He directed the short films Apartamento 206 (2003) e Bonde do Brejo – Engolindo Sapos (2004). Damn Cartoonists is his first feature film.


Diego studied Economy and Film Screenwriting in Cuba and Barcelona. He has developed his career as a screenwriter for cinema and television. He directed the short Inside down basement (2008), awarded best director at Florianópolis Festival (FAM), Brazil. October, their first feature film, got the Jury Prize in Un Certain Regard at Cannes Festival.