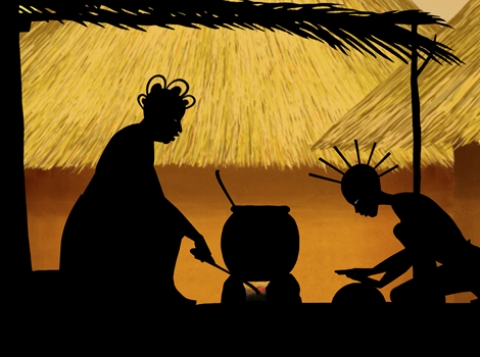 Tales Of The Night

Tales Of The Night

Every night, a boy, a girl and an old man meet in an old cinema. But the old picture palace harbours a secret. The cinema is a magical place where the three friends enjoy rummaging about, fantasizing, dressing up and playing parts in make-believe stories which, at night, become all too real for them. This is the time when sorcerers and elves take over in the auditorium, courageous stable hands long for beautiful princesses, werewolves howl and hard-hearted ladies swish their heavy silk skirts. Here, there are cities of gold and forests that are so deep that nobody ever finds their way out again. This is a magical universe pervaded by waves of harmony, where heavenly choirs compete with the dull thud of magical drums. On nights like these, malevolence can unleash great misfortune. 
Was born in 1943, in France. Graduated from the National Academy of Decorative Arts in Paris and the California Institute of the Arts. Has made cartoons for film and television since the 80s. Directed the award-winning animated movies Kirikou and the Sorceress (1998, 27th Mostra) and Princes and Princesses (2000, 24th Mostra).