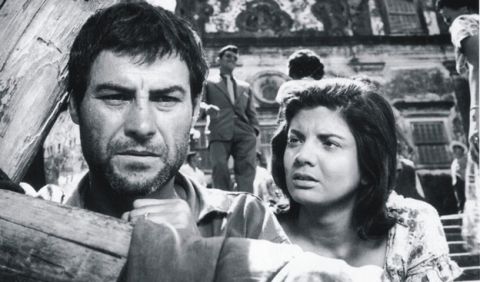 Zé do Burro lives with Rosa, his wife, on a small property close to Salvador. One day, his donkey is struck by a lightning. In a candomblé session, he makes an offering to Saint Bárbara to save the animal, and the donkey recovers. To keep his word, he gives away half his property, and sets off on foot to Salvador bearing an enormous wooden cross. At the city, Rosa falls in love with a pimp and priest Olavo, responsible for the Santa Bárbara church, does not allow him into the church because his promise was made in a candomblé session. The film is an adaptation of a homonymous play written by Dias Gomes in 1959.

Winner of the Golden Palm at the Cannes Film Festival. 
Born in Salto, Brazil, in 1920. He was an actor, writer and director. He started his career on cinema as an extra of Orson Welles’ film It’s All True (1942), which was never finished. He was one of the biggest stars of Brazilian cinema when decided to make his first film as a director, Absolutamente Certo (1957). The feature The Given Word was recognized worldwide and nominated for an Oscar. He also directed, among others, Um Certo Capitão Rodrigo (1971), the segment Oh! Dúvida Cruel of Já Não Se Faz Amor como Antigamente (1976) and O Crime do Zé Bigorna (1977). He died in São Paulo in 2009 at the age of 89.