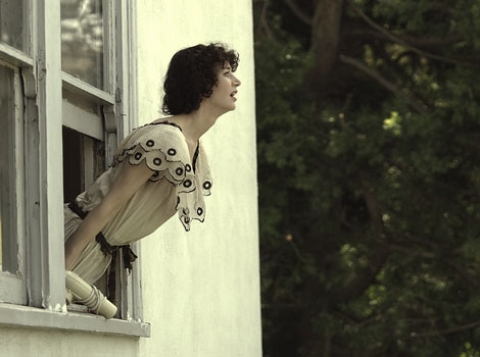 Sophie and Jason are strange the way all couples are strange when they’re alone. They live in a small LA apartment, have jobs they hate, and in one month they’ll adopt a stray cat named Paw Paw. Like a newborn baby, he’ll need around-the-clock care. Despite their good intentions, Sophie and Jason are terrified of their looming loss of freedom. So they quit their jobs and the internet to pursue their dreams – Sophie wants to create a dance, Jason wants simply to be guided by fate. But as the month slips away, Sophie becomes increasingly, humiliatingly paralyzed. In a moment of desperation, she calls a stranger, Marshall – a square, fifty-year-old man who lives

in the Valley. In his suburban world, she doesn’t have to be herself; as long as she stays there, she’ll never have to try (and fail) again. Living in two terrifyingly vacant and different realities, Sophie and Jason must reunite with time, space and their own souls in order to come home. 
A filmmaker, artist, and writer born in Vermont, USA, in 1974. Her videos, performances, and web-based projects have been presented at sites such as the Museum of Modern Art, the Guggenheim Museum and in two Whitney Biennials. Acted in the film Jesus’ Son (1999), by Alison Maclean, exhibited at the 24th Mostra. Miranda wrote, directed and starred in her first feature-length film, Me and You and Everyone We Know (2005, 29th Mostra), which won a special jury prize at the Sundance Film Festival and four prizes at the Cannes Film Festival, including the Caméra d’Or.