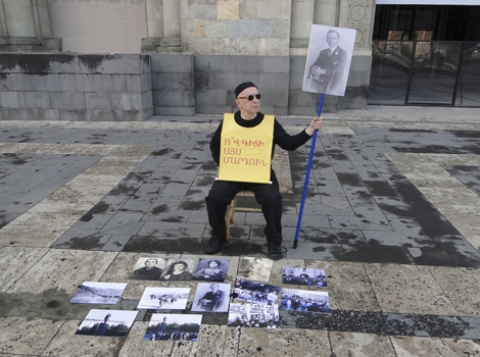 Invited by São Paulo International Film Festival, ten of the most renowned directors in the world present their vision of invisibility in today’s world in episodes filmed in the city of São Paulo.

From Visible to Invisible, by Manoel de Oliveira

With irony and refined humor, we follow the surprising reunion of two friends, Ricardo and Leon, at Avenida Paulista, the heart of São Paulo. One is Portuguese, passing through Brazil; the other, Brazilian. They try to talk, but their cellphones won’t stop ringing, disturbing their conversation. Finally, they decide to ring one another in attempt to communicate. They talk about life, ethics, love, friendship and also about the time that goes by, surrounded by the restless pace of the city and people that can’t stop.

Tribute to the Cinema Audience, by Jerzy Stuhr

Polish director Jerzy Stuhr makes a tribute to the audience of movie theatres, filming the public of one of the screenings of his film, Tomorrow´s Weather (2003), at the São Paulo International Film Festival. Also an actor, Stuhr notices the lack of reaction of the audience in the theatre.

The emptiness and the hustle at the Consolação Cemetery, in São Paulo, are contrasted with images of a black cat that lives there and the visitors that come during All Souls` Day.

In 1968, filmmaker Pier Paolo Pasoloni and his producer Gian Vittorio Baldi were aiming to film the life of the apostle Saint Paul in the suburbs of a metropolis. Forty years later, the idea clicked again to Gian during his stay in São Paulo, and he decided to visit Heliópolis.

The native forest of the Trianon Park on Paulista Avenue, the heart of Sao Paulo, is rediscovered by the Guarani-Kaiowá indigenous people during their visit to the city. When they leave the park, they are surrounded by curious people that pass by.

To see or not to see, de Wim Wenders

Some time ago, Yasmin, Itamara and Dandara would have gone to a blind school. Thanks to the pioneering program developed by dr. Silvia Veitsman, from the Department of Ophthalmology in Santa Casa de São Paulo, teaching children to use residual vision early on, the three girls now go to regular schools.

Adventures of the Invisible Man, by Maria de Medeiros

A breakfast served on a tray moves through the corridors of a luxury hotel, on a clatter of dishes. It opens doors of intimacies exposed without shame in the sight of a waiter, the man who should be invisible and sometimes sees more than he wanted.

The underworld of the center and of the underground of São Paulo and its almost imperceptible inhabitants. The colorful of street art of graffiti in the melancholy of the outside world without redemption, and the weight of divine consciousness.

Yerevan - The Visible, by Atom Egoyan

A man goes to Yerevan, capital of Armenia, to recover the story of his grandfather who disappeared. He brings a poster and a series of photos, looking for more information to the central town square (Republic Square, former Lenin Square). There, he draws attention of a man who found among his pictures an old friend, killed in that same square, in a crackdown never known in Brazil.

The Transparent Being, by Laís Bodanzky

To Japanese Yoshi Oida, creator of the concept of the “invisible actor”, an actor achieves a great performance when he is not seen on stage. Mixing art and documentary, the film investigates the work of the actor though interviews like Monja Coen’s and performances like the actor Lee Thalor’s. 
Born in Santiago, Chile, in 1955, and raised in São Paulo and in Buenos Aires where he worked as a teacher. During the military dictatorship in Argentina, he sought exile in Milan. He later worked as a photographer and videomaker in New York. After five short films, he directed his first feature, Fenced In (1991), followed by Garage Olimpo (1999, 23rd Mostra), Sons and Daughters (2001, 27th Mostra), Birdwatchers (2008, Opening Film of the 32nd Mostra). He also directed a segment for Mostra’s collective film Invisible World (2011), also being screened at the 36th Mostra. 
Film and stage director, she coordinates since 2004 the project Cine Tela Brasil, which promotes the encounter between cinema and education in low income communities, which has led more than 850 thousand people to the cinema. She graduated in cinema at FAAP. Her first work in the film was the short Cartão Vermelho (1994, 18th Mostra). She directed the documentaries Cine Mambembe, o cinema descobre o Brasil (1999, 23rd Mostra) and A Guerra dos Paulistas (2002) for TV. In 2000, she directed her first feature film Brainstorm (24th Mostra), winner of Brasilia Film Festival. She has also directed the features The Ballroom (2008) and As Melhores Coisas do Mundo (2010). 
Born in Porto Alegre and lives in São Paulo. He works as a photographer, musician, soundtrack composer and art director for film, and music videos director. He was part of the art crew of Beto Brant and Renato Ciasca last film, I`d receive the worst news from your beautiful lips (2011, 35th Mostra).