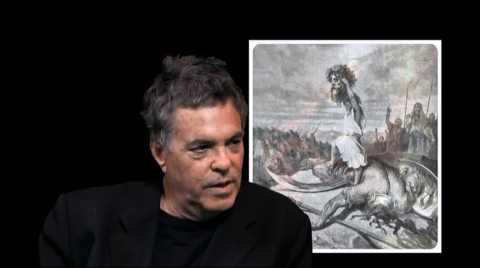 Those who have seen the Modernity segment of the omnibus film Welcome to São Paulo (2004), produced by Mostra, have already taken note of Amos Gitai’s sensibility for the architecture. Within the dark hallways of the Holiday Inn Anhembi hotel during a rainy day, bordering Martinal Tietê, the filmmaker rehearses making a synthesis film on the city. A film he never manages to eventually edit, either due to not having enough time or maybe because the city does not hold a synthesis. But the nausea that runs through his unfinished short film on São Paulo, shot inside an airport lobby, is the opposite of the passion we see in the Architecture in Israel series. Interviewing an expressive amount of Israeli architects, writers, historians and politicians, Gitai handles a variety of themes, above all connected to the construction of residencies in the country.

Son of Munio Gitai Wienraub, a German architect who studied at Bauhaus and worked with Munio Gitai Weinraub, decisively collaborating in bringing rationalist European architecture to Israel before it was even created in 1948, Amos graduated as an architect in Haifa and earned his PhD at the University of California, Berkley, also in architecture. While there, he studied with Christopher Alexander, a mathematician who became an urban planner, incorporating a language of standards as syntax not only for architecture, but also urbanism, pointing to different paths in modern planning. This subject is brought to light in an interesting way during the To Build and Destroy episode, where the filmmaker interviews architect Israel Godovich, who inaugurated collaborative practices in constructing social housing blocs in Israel while serving as Minister of Housing during the 1970s.

The episodes examine themes that are not only scholar, but can also be related to everyday life, such as the daily routine of the Yemenite neighborhood in Jerusalem (Bukharan). In The White City, Gitai speaks to Micha Levine, discussing the immense heritage of modern architecture a-la Bauhaus that presides in the city of Tel Aviv. What is under discussion is the actual construction of the state of Israel, its history and identity, besides the oedipal theme for an architect-filmmaker. An informed and intelligent man, Gitai manages to take his conversations to non-conventional paths, favoring open-minded thinking on these processes. Worried about the project’s nature as much as he is with the dimension of the use of architectural and urban spaces, Gitai proposes thoughts that are very much in tune with the X Architecture Biennale’s curatorial project, having City: Ways of Making, Ways of Using as its theme.