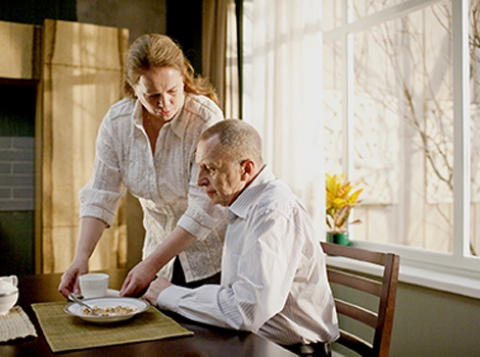 Elena and Vladimir are an older couple with different backgrounds. He is a wealthy and cold man, and she is a docile wife coming from a modest milieu. They have met late in life and each one has children from previous marriages. Elena’s son is unemployed, unable to support his family, and constantly asking his mother for money. Vladimir’s daughter is a careless young woman who has a distant relationship with her father. A heart attack puts Vladimir in hospital, where he realizes that his remaining time is

limited. A brief but somehow tender reunion with his daughter leads him to make an important decision: she will be the only heiress of his wealth. Back home he announces it to Elena. Her hopes to financially help her son suddenly vanish. The shy and submissive housewife then comes up with a plan to give her son and grandchildren a real chance in life.