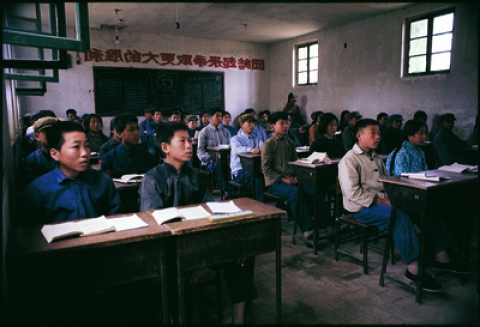 In 1972, in the hardest period of the Maoist Cultural Revolution, the Chinese government invited Michelangelo Antonioni to make a documentary about the New China. The filmmaker spent eight weeks with his filming crew in Beijing, Nanquim, Suzhou, Xangai and at the Henan province. As a result, a three-hour long monument of his visits to the countries‚Äô towns and rural areas, in a key moment of the 20th Century. The film caused great rage among the Chinese authorities and remained forbidden in the country until 2004. Even in the West, the movie only began to circulate again in 2009, two years after the death of the filmmaker.


He was born in Ferrara, Italy, in 1912 and passed away in 2007. Michelangelo Antonioni explored the incommunicability in his movies and influenced a whole generation. After working as a journalist and movie critic, he went to work as Roberto Rosselini, Giuseppe de Santis and Michel Carné’s assistant. In 1943 shot the short film Gente del Po. In 1948 he wrote the script for The White Sheik, which was produced four years later. His first feature film was Story of a Love Affair, 1950. Always innovative, he impressed in his films esthetical and narrative experiments, in productions like Blow Up (1967), Zabriskie Point (1969), and The Passenger (1975). In 1980 he directed The Mistery of Oberwald (4th Mostra) and in 1982, Identification of a Woman, with a gap of 13 years without filming due to a strike he suffered. But he still filmed Beyond the Clouds in 1995, exhibited at the 19th Mostra, and one of the segments of Eros (2004).