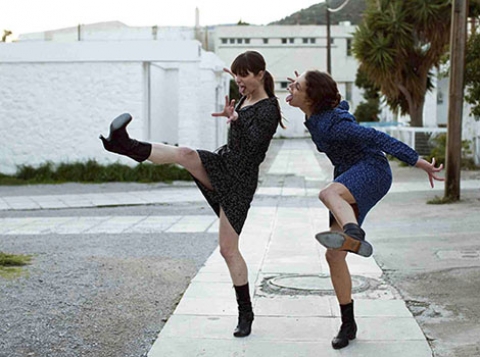 Marina, 23, is growing up with her architect father in a prototype factory town. Finding the human species strange and repellent, she keeps her distance. She chooses to observe it through the songs of Suicide, the mammal documentaries of David Attenborough, and the sexual education lessons she receives from her only friend, Bella. A stranger comes to town and challenges her to a foosball duel, on her own table. Her father meanwhile ritualistically prepares for his exit from the 20th century, which he considers to be overrated. Between these two men and her friend, Bella, Marina investigates the wondrous mystery of the human fauna. 
Was born in Greece. Graduated in film directing from the University of Texas. Directed The Slow Business of Going (2000), a sci--fi road movie shot in nine cities across the world. She was the co-founder and artistic director of the Cinematexas International Short Film Festival. Produced Kinetta (2005), and was associate producer of Dogtooth (2009, 33rd Mostra), both directed by Yorgos Lanthimos – the last one winner of Un Certain Regard at Cannes Film Festival.