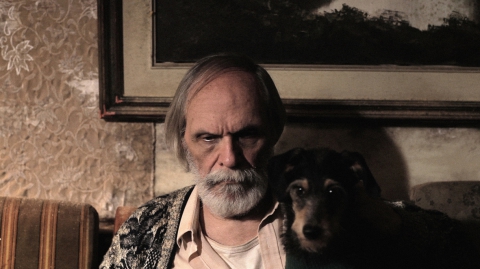 After separating from his wife, André resumes living with his father, who leads a confined, reclusive lifestyle, only attached to Baleia, his dog. The reunion uncovers a difficult and distant relationship due to memories of André’s brother, who disappeared 30 years ago during the Brazilian military dictatorship. With the intention of bonding with his father, André uncovers some old Super-8mm reels, filmed by his brother right before he disappeared, and decides to screen one of them. The father, however, refuses to relive the past.


Born in Montevideo, Uruguay, 1979. At the age of six, he moved to Israel. In 2002, he entered the Bezalel Academy of Arts and Design in Jerusalem. Living in São Paulo since 2004, he earned a film degree at FAAP in 2007. Avós (2009), his first short film, premiered at the Berlinale. Among his other works, he directed the short OMA (2011). Avanti Popolo is his feature film debut.