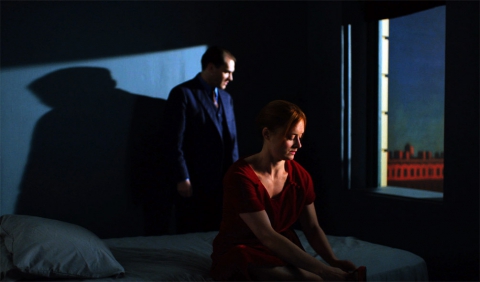 A series of eight short fiction films directed by eight European filmmakers. Each film was inspired by a famous painting by American legendary painter Edward Hopper. The series was shot in Berlin, New York, Washington, Paris, London and Mexico.


Born in 1974 in Denmark, he graduated from the Copenhagen Movie School. An awarded music video director, he has worked with artists such as Feist, David Byrne & St. Vincent and Kanye West. Young Man Falling (2008), his first fiction film, was presented at the Semaine de la Critique at the Cannes Film Festival.


One of the greatest theater and movie French actresses, Dominique Blanc has stared in films by directors such as Claude Chabrol (A Story of Women, 1988), Louis Malle (May Fools, 1989, 14ª Mostra) and Amos Gitai (One Day You’ll Understand, 2007, 32nd Mostra). In 2005, she directed the documentary Sandra Kalniete, the lady from Latvia. 
Born in France but settled in the USA, Sophie Barthes directed the short films Zimove Vesilya (2004) and Happiness (2006) and the feature film Cold Souls (2010, 34th Mostra).


Born in 1981 in Belgium, Valérie Pirson has directed her first animated short-film, Pistache, in 2005. She worked at the animation department of films by Michel Gondry, such as the The Science of Dreams (2005) and Is the Man Who is Tall Happy?: An Animated Conversation with Noam Chomsky (2013).


A French video director and plastic artist, Valérie Mréjen has directed the short films La Défaite du rouge-gorge (2001), Chamonix (2002) and French Courvoisier (2009). She has also directed documentaries, such as Pork and Milk (2004) and the fictional feature film En ville (2011), exhibited at the Director’s Fortnight in Cannes.