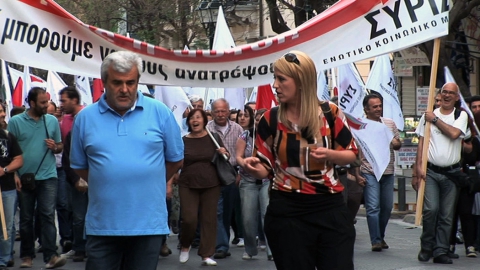 Demokratia, The Way Of The Cross

Demokratia, The Way Of The Cross

The May 6th, 2012 parliamentary election, held against the backdrop of an unprecedented economic, social and moral crisis, was an historical moment for Greece and a challenge to its democracy. Following the “way of the cross” of four candidates and providing a view of what happens backstage, the film is a portrayal of the political practices in Greece today. 
Born in Paris in 1952. Since 1978, he has lived and worked in Athens. After a brief
career as an architect, he took up filmmaking as a director, screenwriter and producer.
He has directed and produced the documentaries Athens, in Search of
the Lost City (1993), Marseilles, a Greek Profile (2004) and Themis (2008).
Demokratia, the Way of the Cross is his fourth feature film.