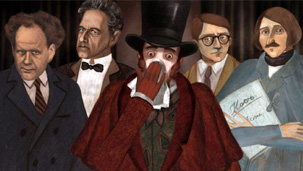 Spring has come to Pripyat, a town of 50,000 in the Ukraine countryside. On April 25, 1986, little Valery plants an apple tree with the help of his father Alexei, a scientist. Anya and Piotr celebrate their marriage with friends and relatives. An explosion in the nearby nuclear plant in Chernobyl, followed by heavy rain showers, shakes the local community that, oblivious of the dangers, is evacuated only four days later. Piotr takes part in the fire fighters‚Äô operations. Ten years later, in an apocalyptic scenario, Anya returns to the deserted places as a tour guide. Piotr never went back home. Alexei is missing. Valery, now a young man, searches for his stolen past. For all the survivors, nothing will ever be the same.


Born in Israel in 1971 and raised in Paris. She studied anthropology at the Sorbonne of Paris and film studies with Jean Rouch, then philosophy at the Hebrew Jerusalem University. In Israel she also studied photography. She moved to London for undertaking cinema studies at the National Film and Television School. Directed a few documentaries, including Odessa… Odessa! in 2005. Land of Oblivion is her first feature film.