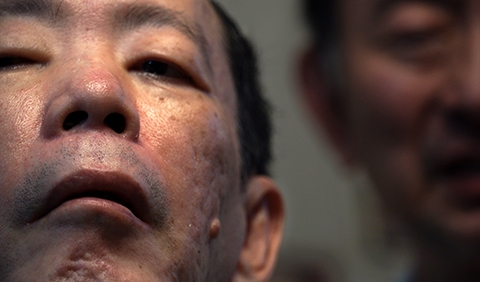 A student at the Paris-Sorbonne, Issei Sagawa was arrested on June 13, 1981 when two suitcases containing the remains of his Dutch classmate, Renée Hartevelt, were found. Two days earlier, after shooting her in the back of the head, mr. Sagawa raped and then ate his way through her corpse. Declared legally insane, he returned to Japan. He has been a free man ever since. Ostracized from society, he has made his living off his crime, writing novels, drawing manga, appearing in innumerable documentaries and sexploitation films in which he reenacts his crime. The film is set in his small home on the outskirts of Tokyo, and depicts his daily life, and long conversations with his brother Jun-san, his principal carer.

Winner of the Special Jury Prize at the Horizons section at the Venice Film Festival. 
Verena was born in Neuchâtel, Switzerland. Lucien was born in Liverpool, England. The partnership between them resulted in documentaries, such as Leviathan (2012), winner of the FIPRESCI Prize at the Locarno Film Festival, Nature Morte (2013) and Ah Humanity! (2015). The duo produced Manakamana (2013), directed by Stephanie Spray and Pacho Velez, screened at the 37th Mostra.