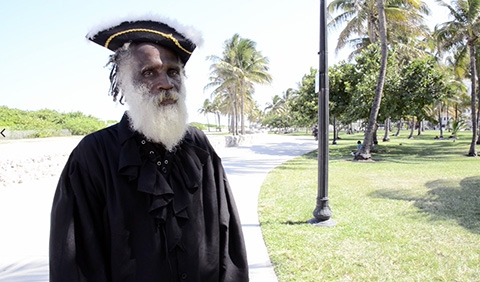 Homeless yet always flamboyantly dressed; a man of numerous monikers yet an absolutely singular character; Pirate, a.k.a. Monarch, a.k.a. Kevin, lives in the streets. Or, as Pirate himself puts it, he is a resident of Miami`s South Beach “Sandominium”. Pirate reflects on his life adventures from various street corners and parking lots, or while using the public exercise equipment at Miami Beach. 
Born in Chile in 1943. He is a cinematographer and director. Castilla has worked in films like The Widow Montiel (1979), by Miguel Littin, and Gentille Alouette (1990), directed by his brother Sergio M. Castilla. He directed the documentary Nombre de Guerra: Miguel Henríquez (1988) and the short Y Aquí No Pasó Nada (1991).