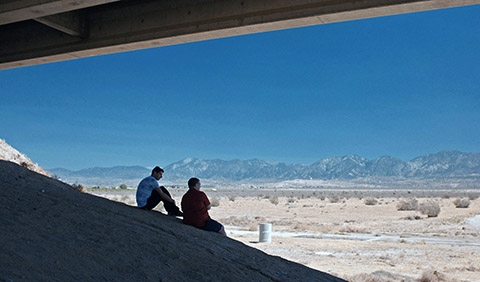 A film on human desires and needs, a story about loneliness in people and their search for a closer relationship. An apparently common family living in an apartment facing sunny Savior’s Square in Warsaw is about to change their address. The husband has been working with determination in the field of civil construction and has tried without much luck to open his own business. His wife takes care of the children at home with the help of his mother-in-law. Things get worse however when the building company responsible for the family’s new apartment goes bankrupt. These are everyday people and their stories are real, where the malice of fate feeds on coincidence, unfruitful intent and the fragile nature of human beings. The three central actors take part in the script for, similar to the work procedures of film maker Mike Leigh, they developed their characters after an intensive workshop with the directors. The film was awarded for Best Actress (Jowita Budnik), Best Supporting Actress (Ewa Wencel), Soundtrack and Critic’s Prize, in addition to the Grand Prix at the Festival of Polish Cinema in 2006 in the city of Gdynia. The following year, it was again award winning, this time, the official cinematographic Prize in the country – the Eagle – for Best Film, Directing, Actress and Supporting Actress.


Married, the directors have been working together for ten years. Joanna Kos-Krauze was born in 1972 and studied Polish Language and Hebrew Literature at Warsaw University. Krzysztof Krauze was born in 1953 and graduated from the Lodz School of Cinema. In 2004, the couple filmed My Nikifor that was awarded prizes in the main categories of the official Eagle Award of Poland and also at the Karlovy Vary Film Festival. This was the first film credited to both. Krzysztof began filming in 1980 with a short film Deklinacja. He made his first feature in 1988 with New York, 4 A.M. and subsequently Street Games (1996) and The Debt (1999), also winner of the main categories of the Eagle Award.