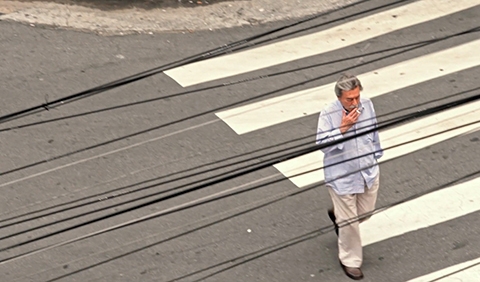 IT’S ALL A PLAN

IT’S ALL A PLAN

Documentary about the life and work of Paulo Mendes da Rocha, the most renowned living Brazilian architect. He tells his own story throughout a series of revealing interviews with his own daughter, Joana, over a period of ten years, he exposes his reflections on urbanism, nature, humanity, art and technique, shedding light on the thinker whose ideas granted him the prestigious Pritzker Prize, lifting him to the Pantheon of contemporary architecture. In a constant dialogue between interviewee/father and interviewer/daughter, Joana is the thread of the film. As in all personal relationships, especially between parents and children, the thread that leads is also what is driven. 
Graduated in film from the University of São Paulo. Set producer at Sérgio Bianchi’s feature The Secret Cause (1994), and has a long historic working at television channels like MTV Brasil, GNT, National Geographic Channel and A&E. It`s All a Plan is her first feature as director. 
Documentary series and TV programs director in channels like National, Warner Channel and GNT. Nowadays directs GNT’s Saia Justa program. It`s All a Plan is her first feature as director.