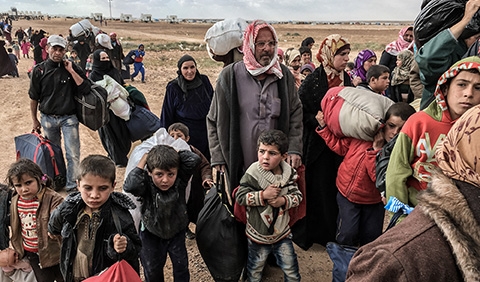 Captured over the course of an eventful year in 23 countries, the film follows a chain of stories that stretches across the globe in countries including Afghanistan, Bangladesh, France, Greece, Germany, Iraq, Israel, Italy, Kenya, Mexico, and Turkey. It follows a desperate search for safety, shelter and justice: from teeming refugee camps to perilous ocean crossings to barbed wire borders; from dislocation and disillusionment to courage, endurance and adaptation; from the haunting lure of lives left behind to the unknown potential of the future. Born in Beijing, China, in 1957. Political dissident and one of the most important contemporary artists, Ai Weiwei also acts as filmmaker, photographer and architect. Son of Ai Qing, one of the most successful poets in China, he grew up in exile in his own country. When he was young, Ai Weiwei went to the USA and entered Parsons School of Design in New York, but most of his learning came from experiences with local artists and intellectuals. Back to China, he produced some of his most important works, like the destruction of an ancient urn dated from the Hun dynasty and the widely known series of images called Study of Perspective. He directed documentaries such as Disturbing the Peace (2009), So Sorry (2012) and Ordos 100 (2012). In 2017, at the 41st Mostra, Ai Weiwei signed the concept art to the edition’s poster, presented the documentary Human Flow and was honored with the Humanity Award. At the 44th Mostra, he exhibits Coronation and Vivos.