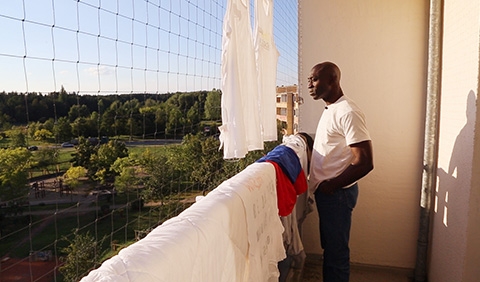 WHEN PAUL CAME OVER THE SEA - JOURNAL OF AN ENCOUNTER

WHEN PAUL CAME OVER THE SEA - JOURNAL OF AN ENCOUNTER

Paul has made his way from his home in Cameroon across the Sahara to the Moroccan coast, waiting for the right moment to cross the Mediterranean. This is where he meets Jakob, a filmmaker from Berlin, who is filming along Europe`s borders. Soon afterwards, Paul manages to cross over to Spain on a rubber boat, but half of his companions die on this odyssey. Held for two months in a deportation centre, upon his release Paul meets Jakob again at a shelter for migrants in southern Spain. When Paul decides to continue on to Germany, Jakob has to make a choice: will he become an active part of Paul`s pursuit of a better life or remain a detached filmmaker? 
Born in Berlin, Germany, in 1975. He graduated in law from the Sorbonne, in Paris. Preuss made his directorial debut with the documentary feature The Other Chelsea: a Story from Donetsk (2010). When Paul Came Over the Sea - Journal of an Encounter is his second feature film.