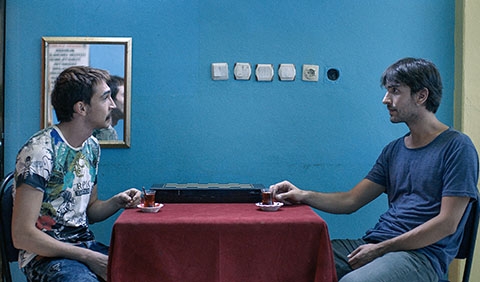 Leaving behind a ruined career and a bitter divorce, Selim returns to his hometown. Unwilling to make plans for the future, he wanders around revisiting his past: family, schoolmates, a friend from the military service, an ex-lover. As people start leaving Izmir due to a terrible smell caused by a mysterious maritime accident, Selim finds himself gradually drawn to a new world where he will go back embracing the possibilities of life. 
Born in Turkey in 1981. Graduated in film studies from the Mimar Sinan University and from the University of Paris - La Sorbonne. He worked as a producer in the French capital and moved back to Istanbul in 2008 where he also started developing his own projects. He was one of the producers of Come to My Voice (2014, 38th Mostra), by Hüseyin Karabey. The Gulf is his feature directorial debut.