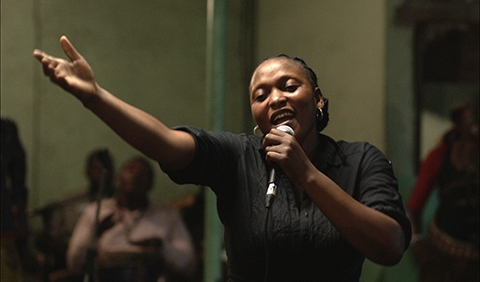 Félicité is a proud and independent woman who works as a singer in a bar in Kinshasa, capital of Democratic Republic of the Congo. Whenever she goes on stage, she appears to leave her everyday worries behind. But then one day Félicité’s son has a terrible accident. Whilst he is in hospital she desperately tries to raise the money needed for his operation, starting a tour through the impoverished streets and the wealthier districts of the city. One of the bar’s regulars, a man named Tabu offers to help Félicité. Reluctantly, she accepts.

Winner of the Grand Jury Prize at the Berlin Film Festival.


Born in Paris in 1972. He is a director and writer and studied art history and film at the Sorbonne University in Paris. His feature film debut, As a Man (2001), was awarded a Silver Leopard of Young Cinema at Locarno Film Festival. He also directed Andalucia (2007) and Today (2012), chosen as Senegal’s entry for an Oscar nomination for best foreign language film.