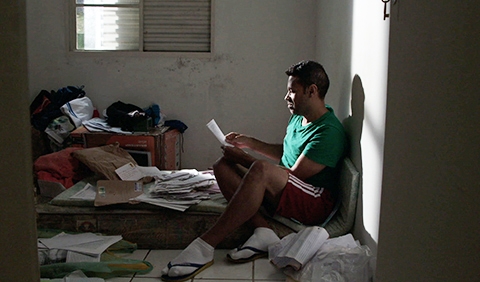 LETTERS TO A BOOK THIEF

LETTERS TO A BOOK THIEF

Laéssio Rodrigues is considered the greatest thief of rare books in Brazil. Over the last five years, this documentary has followed his trajectory, which includes four imprisonments. It is not an ordinary story the one of a young bakery attendant, obsessed with antique papers, who starts to live among fine art merchants and collectors and then sees himself in the newspapers’ crime pages. But the decision to narrate it involves dilemmas for which neither Laesio nor the documentary itself were prepared. Although in twisted ways, Laessio evidences the necessity of Brazil to take care of its own History. 
Carlos is a journalist graduated from the School of Communications and Arts of the University of São Paulo (ECA-USP). Co-founder of the NGO Repórter Brasil, directed in partnership with Caio Cavechini the documentaries Carne, Osso (2011), Jaci - Seven Sins of an Amazon Work (2015) and Entre os Homens de Bem (2016).