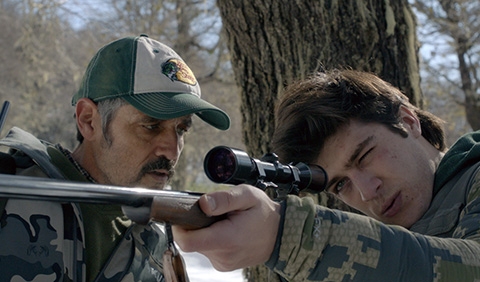 Ernesto is a respected hunting guide in Patagonia, where he lives with his new family. After his first wife dies, he is forced to house his teenage son, Nahuel, whom he hasn’t seen for more than a decade. Confronted with the past he left behind, Ernesto struggles to contain the violent outbursts of his son. Without the sympathy of his new family, Nahuel stretches the conflict with his father to the limit. In the hostility of nature, resentment gives way in to a possible relationship between these two men. The reunion will confront them with their own ability to kill and forgive. 
Born in Argentina in 1982. She graduated from the University of Cinema, in Buenos Aires, and directed three short movies: Rincón de López (2011), Mares and Parakeets (2012) and Sundays (2014). Hunting Season is her first feature film.