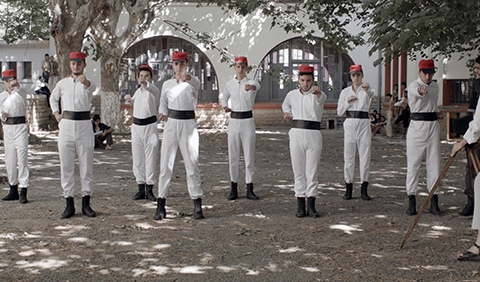 Using archives from the early “scientific expeditions” and “taming campaigns” led by the French colonizers in North Africa, the film follows a community of young nomads and wanderers as they form an imagined utopian society in response to imperialistic rule. Reenactments, improvisations, and interviews are conducted with the inhabitants of Algiers, Kythira Island and the Prosfygika community in Athens, reflecting on the transmission and re-appropriation of history and reviving memories as strategies of resistance.


Born in Algiers, Algeria, in 1969. She created cultural content for various media and has founded two production companies in her country: Centrale Électrique and Allers-Retours, both aiming to help directors and artists engaged with their contemporary history. Her first feature was Bloody Beans (2013). Le Fort de Fous is her second feature film.