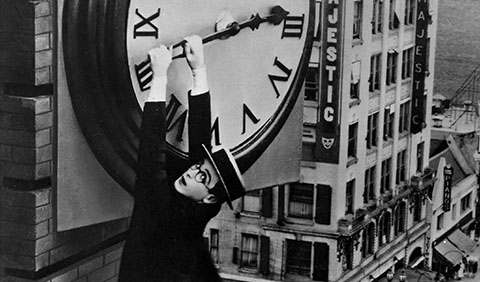 A simple, small-town optimist moves to the big city with hopes of establishing himself enough to send for his sweetheart and marrying her. After taking a job as a sales clerk in a department store, he starts sending his girlfriend expensive presents to convince her that he`s made it. When she shows up in town, he pretends to be the general manager and must carry out a dangerous publicity stunt to earn enough money to keep his ruse going.


Born in the USA in 1895, he started his career as a screenwriter and made his directional debut with The Mohican’s Daughter (1922). Directed Harold Lloyd in the several films such as Girl Shy (1924) and For Heaven’s Sake (1926). Taylor is also known for his collaborations with actress Mary Pickford, who he directed in My Best Girl (1927, 39th Mostra) and The Taming of the Shrew (1929). Died in Santa Monica in 1958 at the age of 62. 
Born in the USA in 1888, he was a professional baseball player before beginning his career as an actor and director. His directional debut was with the film A Sailor-Made Man (1921) starred by Harold Lloyd, with whom he worked in several features such as Girl Shy (1924) and The Freshman (1925). He directed also features like Seven Keys to Baldpate (1925) and The Potters (1927). Died in Los Angeles in 1967 at the age of 78.