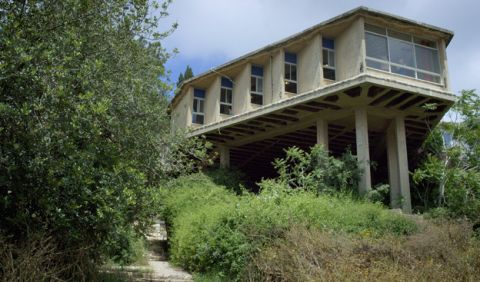 Bickels [Socialism] shows a walk through 23 buildings located in Israel, designed by kibbutz architect Samuel Bickels (1909-1975). Mostly public spaces dedicated to the needs of different kibuttzim, they were built between 1942 and 1973 and represented the ideas of socialist communities of the time. The film shows these buildings in their current state (May, 2015), and while some have their use still preserved, others remain as memorials of a historical movement, recently renovated or in a state of deterioration.

After the screening, there will be a discussion open to the public with the presence of the director Heinz Emigholz, the co-producer of the film Galia Bar-Or, mediated by the film critic Aaron Cutler. 
Born in Germany in 1948. He Studied philosophy and literature in Hamburg. Since 1973, he works as a filmmaker, writer and producer in the USA and Germany. His work seeks to convey the passage of time in cinema through architecture, in its majority modernist, like the architectural project of Louis Sullivan, Rudolph Schindler, Pier Luigi Nervi, and Samuel Bickels, among others. Directed several films including Brooklyn Bathroom Piece (1975), The Basis of Make-Up I (1974-83), Sullivans Banken (1993-2000), Ein Museumsbau in Essen (2010), Parabeton – Pier Luigi Nervi und Römischer Beton (2011-12), and The Airstrip (2011-13).