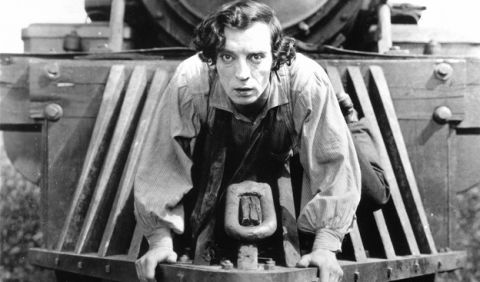 The engine driver Johnnie Gray has two great passions: his locomotive, “the General”, and the young Annabelle Lee. When the American Civil War (1861-1865) begins, the boy is not accepted as a fighter, since he would be more useful as an engineer of the railway line. His beloved, however, starts to believe that he is a coward for not fighting. That is when “the General” and Annabelle are kidnaped by Union spies, and Johnnie need to chase both, in a lively adventure by the rail. 
Born in San Bernardino, USA, in 1894. He began his career in 1912 working in sports editorials of newspapers such as San Bernardino Sun and Los Angeles Times. His first job with cinema was for Universal Pictures, in 1919, writing intertitles. In 1921, he was hired by Warner Brothers to create gags to Buster Keaton. Since then the duo began a successful partnership in which Bruckman signed the scripts of the movies starred and or directed by Keaton, such as Our Hospitality (1923), Three Ages (1923), The Navigator (1924) and Seven Chances (1925). He made his directorial debut in 1925 with the short Cowboys Cry for It. A year later, in 1926, he directed his first feature film, the classic The General, with Buster Keaton. Throughout his career, he was alternating direction and script. Died in Los Angeles, USA, at the age of 60 in 1955.


Born in Piqua, Kansas, EUA, in 1895. He was raised in the middle of the popular and itinerant universe of vaudeville shows by his parents Joe and Myra. In 1917, met Roscoe "Fatty" Arbuckle, famous comedian who at the time was in full decline. Next to him, in the same year, Keaton starred in his first movie, the short film The Butcher Boy. Their partnership yielded more than a dozen short films, such as The Bell Boy (1918) and The Hayseed (1919). His feature film debut was with The Saphead (1920), by Herbert Blaché and Winchell Smith. He starred and co-directed titles such as The Three Ages (1923), Sherlock Jr. (1924), The Navigator (1924) and Seven Chances (1925). He reached his greatest triumph with the comedy The General (1926), held in partnership with Clyde Bruckman. In 1928, he performed the classic The Cameramen. He participated, in 1952, of Limelight, by Charles Chaplin. In 1960, received an honorary Academy Award for “his unique talent which brought immortal comedies to the screen”. Keaton died in Los Angeles in 1966, victim of lung cancer, at the age of 70.