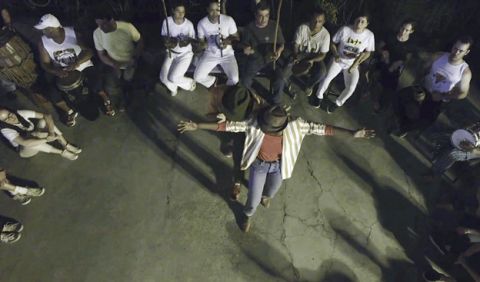 CAPOEIRA, INSIDE THE GAME

CAPOEIRA, INSIDE THE GAME

Two travelling capoeira players go on a journey around the world to meet capoeira movement of other countries. Together they cross Europe and visit places such as Israel, India, USA, Japan and Indonesia. While Jorge Itapuã performs, Ella shoots every step of this adventure with her camera. However, being in contact with different cultures awakens Ella’s desire of becoming a master herself. As Ella embraces the idea of not being behind the camera anymore, her relationship with her master faces strong transformations. 
Capoeira Master and documentary filmmaker, he has been filming the expansion of capoeira around the world for 15 years. He was screenwriter and assistant director of the film Mestre Leopoldina, a Fina Flor da Malandragem (2005), by Rose La Creta. Capoeira, Inside the Game is his directorial debut in feature films.