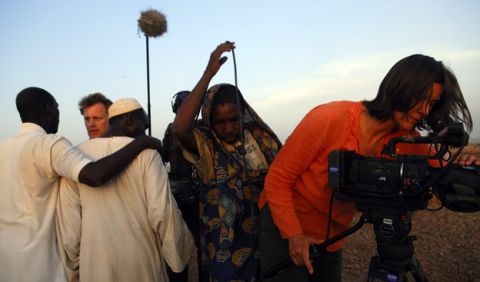 What does it mean to film another person? How does it affect that person —and what does it do to the one who films? A boxing match in Brooklyn; life in postwar Bosnia-Herzegovina; the daily routine of a Nigerian midwife; an intimate family moment at home: these scenes and others are woven into Cameraperson, a tapestry of footage captured over the twenty-five-year career of documentary cinematographer Kirsten Johnson. 
Graduated from Brown University in 1987 with a BA in Fine Arts and Literature. After two years in West Africa working on local fiction and documentary film projects, she attended the Fémis, French National Film School, in Paris. She work as cinematographer on over 40 documentaries such as Kirby Dick’s This Film Is Not Yet Rated (2006, 31st Mostra), and Laura Poitras’ Citizenfour (2014). She also directed Deadline (2004). Cameraperson is her second documentary.