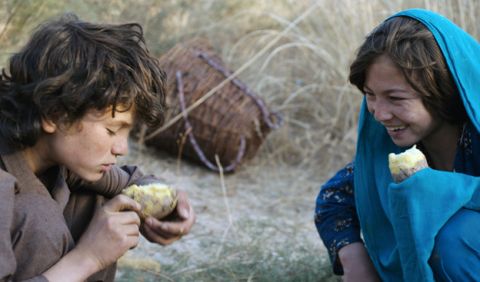 In rural Afghanistan, the shepherd children own the mountains and, although no adults are around, they know the rules; they know that boys and girls are not allowed to be together. The boys practice with their slings to fight wolves. The girls smoke secretly and play at getting married, dreaming of finding a husband soon. The group gossip about Sediqa —she’s 11 years old and an outsider. The girls think she is cursed. Qodrat, also eleven years old, becomes the subject of gossip when his mother remarries an old man with two wives. Qodrat roams alone in the most isolated parts of the mountains, where he meets Sediqa and they become friends.

Winner of Art Cinema Award at Director’s Fortnight at the Cannes Film Festival. 
Born in Teheran, Iran, in 1990. She moved to Afghanistan when she was a child. Shahrbanoo is a writer, director and producer. She directed short movies such as Vice Versa One (2011) and co-directed the hybrid project Not At Home (2013). At 20 years old, she was the youngest director ever selected for Cannes Cinéfondation Residency.