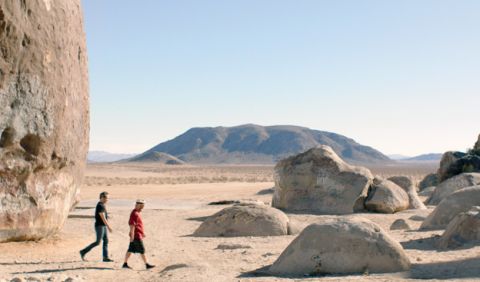 WHERE IS ROCKY II?

WHERE IS ROCKY II?

In 1979, American artist Ed Ruscha allegedly made a fake rock out of resin and hid it among real ones somewhere in California`s Mojave Desert. Named Rocky II after the Sylvester Stallone film, the work is not listed in any catalogue of Ruscha`s work. Obsessed with this mystery piece, the screenwriter Pierre Bismuth sets out to find it in his mix of documentary and fiction that has the participation of writers D.V. DeVincentis, by High Fidelity (2000), Anthony Peckham, by Invictus (2009), and Mike White, by School of Rock (2003). 
Born in France in 1963 and lives in Brussels, Belgium. His work moves between paintings, collages, sculptures and video installation. In 2005, he wins the Oscar for the best original screenplay along with Michel Gondry and Charlie Kaufman for Eternal Sunshine of the Spotless Mind (2004). Where Is Rocky II? is his debut in feature films direction.