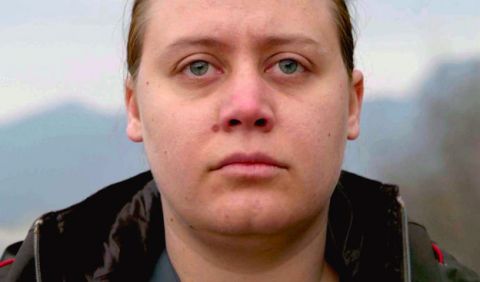 In a remote Bulgarian town, Gana looks after the elderly with dementia and traffics their ID cards on the black market. Her mother, with whom she hardly speaks, is jobless, and her relationship with her boyfriend is not great either. Nothing seems to have consequences for Gana; not even the incidental murder of a patient, who threatens to expose her little traffic. But things start to change when she hears Yoan, a new patient, singing. A growing empathy for the old man awakens her conscience, but when he is arrested for fraud, she learns that “doing the right thing” demands a high price.

Winner of the Golden Leopard for best film and the prize of best actress for Irena Ivanova at the Locarno Film Festival. 
Born in Bulgaria. She studied fine arts and fiction directing at the National Film and Television School in London. She directed the shorts Rotten Apple (2007), Above Us Only Sky (2008) and By the Grace of God (2009), which was premiered in Cannes. Godless is her first feature film.